Popular salon personality, Jasmine Connor, 19 years old, scooped the title of Junior Stylist of the Year in the Hair and Beauty Awards presented by the Portsmouth News daily newspaper last week.  Jasmine received her award at a prestigious ceremony held in Portsmouth’s Guildhall on the evening of Friday, June 15. 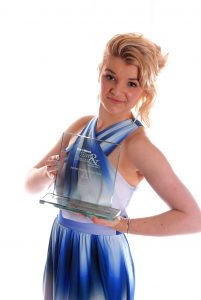 “Offering the best possible guest service is a priority for me and I’m thrilled to have been chosen to take the trophy this year,” said Jasmine, who has worked with us for 5 years, having started her career in the salon’s award winning after school ‘Tiger Club’.

Q Hair and Beauty, which won a Going Green Award in April at the Chichester Observer Business Awards, was also selected for Hair Salon of the Year and Colour Technician of the Year, and salon owner Anthony Barnes-Smith for Lifetime Achievement.

Now in their third year, a record 6,021 nominations for the awards were received by the Portsmouth newspaper. Celebrity judges including Lee Stafford, Jessica-Jane Clement and Amy Childs were part of the judging panel which helped select the winners.

This entry was posted on Tuesday, June 18th, 2013 at 10:27 am by Alastair and is filed under News.
You can follow any responses to this entry through the RSS 2.0 feed.