How did a working-class lad from Sunderland, once destined to work in the shipyards, become one of the world’s top hairdressers and then go on to establish the award-winning Q Hair and Beauty in Chichester, one of the leading salons on the South Coast? Find out in the NEW tell-all book by Anthony Barnes-Smith, Owner of Q Hair and Beauty

Here’s a sneak preview of what you can expect inside!

Backwash basins were quite new then and this particular lady didn’t like them and insisted on a front wash. By the time I’d finished washing her hair, even her knickers were wet.

The salon was on Pink Lane, an area of Newcastle that a lot of prostitutes frequented and they came in very frequently. I got really popular with those girls and in fact when I started doing competitions, my first model was a girl who was on the game. She had bleached blonde hair, which was what I needed for the competition and at that time the only people who had their hair bleached blonde were the prozzies.

Pina Polumbo, a very well-known hairdresser from Glasgow, wrote articles for the hairdressing industry magazines, and it was she who dubbed me ‘the boy wonder’. In fact, that title was a bit like a millstone around my neck, though on the back of it I did become a bit flash. I had a really great work bag I took to competitions – like a holdall with a false bottom to hold all my gear – with my logo stuck on the side. The logo was a bit like the Saint’s on the TV show, with the figure holding scissors and a comb.

As we went flying through the swing doors, I flattened this old boy. I picked him up and was dusting him down and apologising profusely when I noticed two bouncers out of the corner of my eye.

‘Oh my god, you’re Vidal Sassoon,’ I gabbled out

After winning the Don Quixote, I was interviewed by a journalist, with the help of a translator as I didn’t speak Spanish. The journalist looked a bit sleazy, a small greasy kind of man wearing tinted glasses, and he seemed to be getting a bit agitated. I realised the translator wasn’t telling me precisely what he was asking, so I asked her what she wasn’t telling me. It turned out that he wanted to know if I had known Jay Sebring, the famous Hollywood hairstylist who was killed at the Sharon Tate massacre. The film Shampoo was supposed to have been based on Sebring.

I had a bit of a run-in with Stephanie Beecham one day because when I was doing her hair, I turned away for a few moments to speak to another client and she went berserk, saying ‘If you’re doing my hair, I expect your sole attention!’ I told her that it was okay, I could chew and fart at the same time. After that she was nice as pie.

The first time Kate O’Mara came to me she said ‘I know my hair’s f……, darling, but do the best you can with it.’ 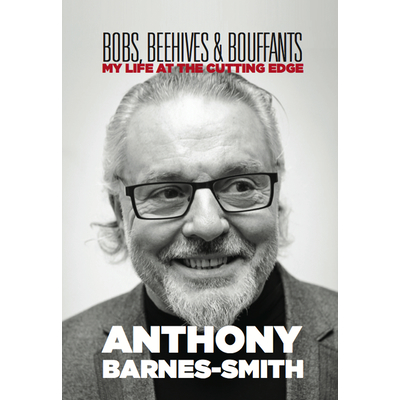 This entry was posted on Monday, September 15th, 2014 at 11:31 am by Kain and is filed under News.
You can follow any responses to this entry through the RSS 2.0 feed.